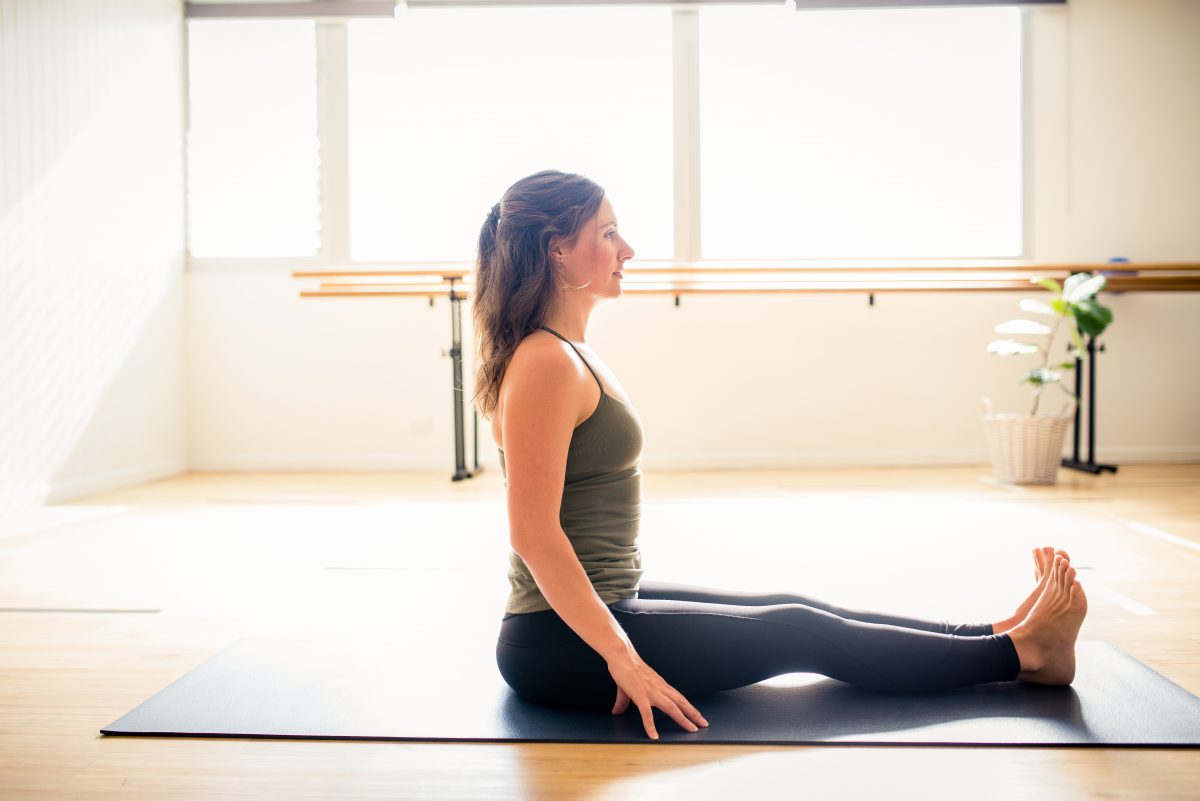 The majority of the population have difficulty sitting in general, let alone for an extended period of time for yoga and meditation.

The most important anatomical consideration (excluding any injuries, which must be treated case by case) is the position of the pelvis. The pelvis can be thought of as a pot from which the spine grows. The pelvic must be neutral in order to effectively support the spine.

Many (in fact most) beginner yoga students tuck their tailbones when they sit. This brings pelvis into a posterior tilt, affecting the ability of the spine to stay neutral. Flexion (rounding) of the spine can cause extra pressure on sitting, making it more physically difficult to sit. Students will then usually try to correct this rounding by lifting from the chest, which contracts and tightens the erector spinae muscles (fast twitch muscles not designed to be held for long periods) and creates even more strain.

When you tuck the tailbone and round the lower back, the diaphragm is inhibited (it is attached at L1/T12) and breathing is affected. The facet joints at the back are also open which puts pressure on the spinal discs anteriorly (at the front). The lower back is actually compromised, not supported. A neutral position of the lumbar spine is a curve.

Starting from the pelvic basin is key to aligning the rest of the spine, having the effect of reduced muscular effort. An aligned spine is also the best position for raising prana and kundalini energies during meditation.

To align the pelvis, imagine the front of the pelvis as a triangle and draw weight downwards from the centre of the pubic bone. The psoas will draw the lumbar spine in to an arch and this will help to support sitting and breathing. The psoas is a slow twitch muscle that can be active for a longer period before exhausting.

Instead we aim to bring the centre of the pelvis (generally around the perineum area) into parallel alignment with the floor. The spine can then float more effortlessly over the pelvis.

A Note on Forward Bends

The cue "ground the sit bones" is often instructed in a seated position prior to a forward folding posture in yoga asana practice. While spinal flexion is a key component of the posture once the student is in the posture, an anterior tilt of the pelvis is the initial action required of the body to enter the forward bend - that is that the pelvis must tip forward, not back. Tucking the tailbone/grounding the sit bones in the seated posture can inhibit pelvic movement required to bend forward and result in a strained posture.

Aligning from the Pelvis

Once the pelvis is in alignment, aligning the rest of the body is usually simple.

Soften the knees and relax the legs.

Float the ribs over the hips.

Float the skull over the spine. Soften the jaw and let the chin slightly drop.

Relax the hands on the legs below the navel and lower than the elbow joint, or use a mudra.

Softly close the eyes or use a mudra.

Quite often students will need support to achieve a neutral pelvis without creating effort in the rest of the body. Anatomical limitations (skeletal differences), inflexibility and injury can result in a decreased in range of movement and sitting without support can be difficult.

For those who when seated cannot comfortably bring their knees lower than their hips (i.e. without effort), or have hip or knee injuries, it is best to use props.

Begin by propping the pelvis and sitting the student on the edge of a stack of folded blankets. Use as many blankets as required until the knees are lower than the hips. Ensure the students places the sit bones at the edge of the blankets otherwise this technique will not be effective.

Using this technique, the pelvis can come into neutral alignment.

Once the pelvis is neutral, you can support the hips and knees from underneath. Place rolled up blankets underneath the space between the outer thigh and the floor so the student can soften their legs into the blankets.

Students may also like padding underneath their ankles - make sure it doesn't lift the ankles too much and is just there to soften between the mat/floor and ankles.

When it comes to sitting for meditation, there are many postures and positions that can be used, including sukhasana, padmasana (lotus) and baddha konasana. Sukhasana is the most easily accessible posture for most students.

You can vary this pose by uncrossing the legs and ankles and placing one leg in front of the other, or coming into half lotus where one leg is placed on top of the other. These postures should only be practiced by students who are well practiced at them.

For students who cannot sit on the floor, use a chair, with their sit bones towards the edge of the chair to maintain pelvic alignment. A cushion or blanket on the chair may be required.

For students who cannot cross their legs, or sit cross legged for a length of time, even with support, supported kneeling positions are a good option.

A bolster lengthwise or a zafu on its side placed between the legs in kneeling will give support to the pelvis and aid in achieving neutral pelvic alignment.

A student may also need a blanket on the mat or floor to cushion the ankles.

For students who cannot sit or kneel at all due to knee or hip problems, use savasana! 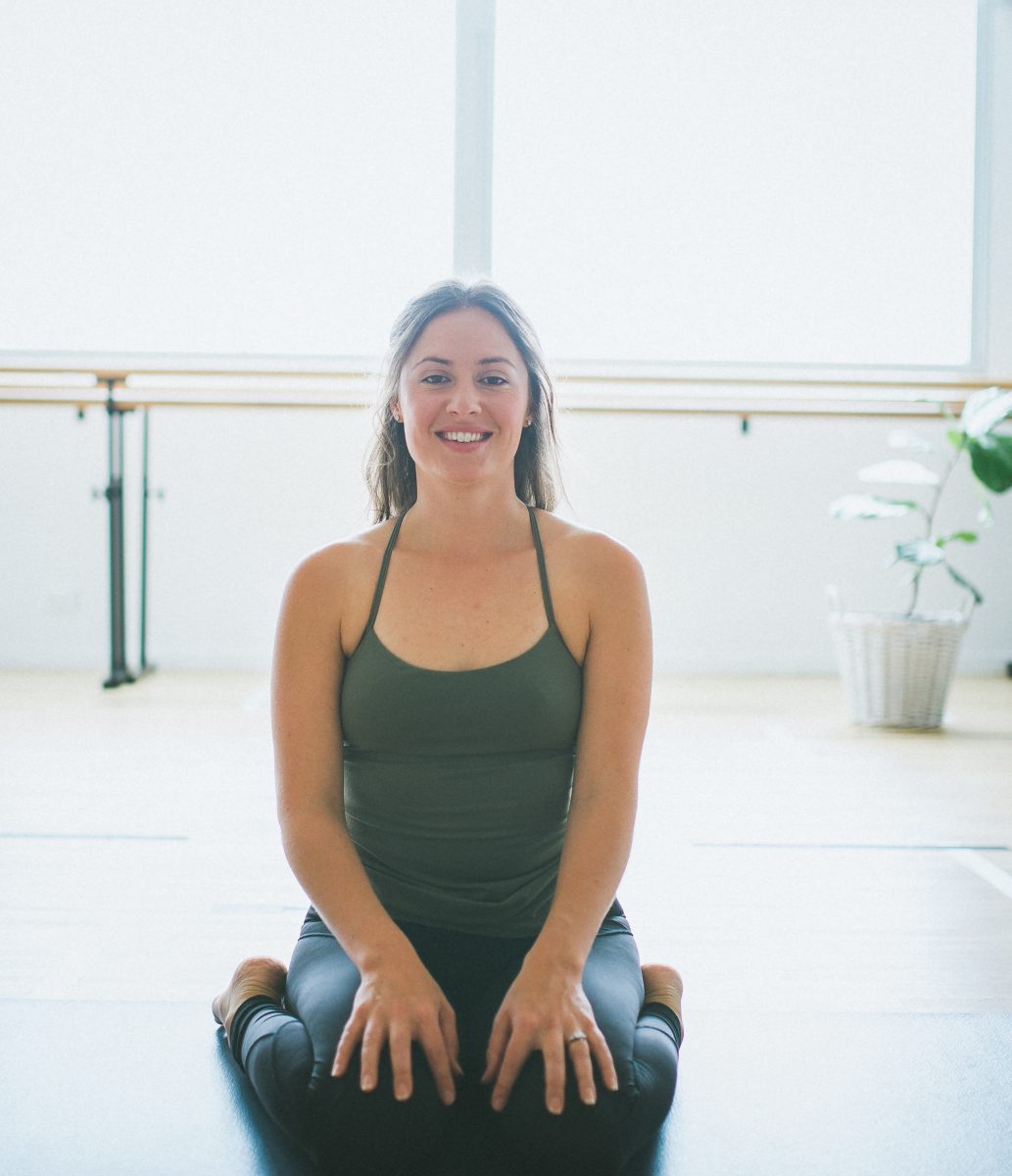